To share your memory on the wall of Lyle Tomlinson , sign in using one of the following options:

Provide comfort for the family of Lyle Tomlinson with a meaningful gesture of sympathy.

To send flowers to the family or plant a tree in memory of Lyle Tomlinson , please visit our Heartfelt Sympathies Store.

Receive notifications about information and event scheduling for Lyle

We encourage you to share your most beloved memories of Lyle here, so that the family and other loved ones can always see it. You can upload cherished photographs, or share your favorite stories, and can even comment on those shared by others.

Posted Aug 31, 2019 at 09:08am
Donna, Beth, Melia
You may not remember me, but I worked several years with your mother. Just want to tell you what a great person she was and how much she loved all of you. Wanda Ferrell
Comment Share
Share via:
MM

Posted Aug 30, 2019 at 06:23pm
Lyle was one of those people that you instantly liked, she was so kind, and her heart could fill a room. She was always trying to help others without thinking of herself. That will be her legacy.

Sending love to my cousin and her family for their loss of their mom. I know my dad, her son Mark, her other siblings and her parents were there to greet her at Heaven's gate.

Although it is difficult today to see beyond sorrow, may looking back in memory help comfort you tomorrow.

With prayers for the family,
Libby (Bruce), Kathy, Margo and Sonny

Posted Aug 30, 2019 at 01:46pm
So sad to hear of Lyle's passing. She was a sweet person. Prayers for the family and all her friends. Guess her and Mary Jane will keep things straight again. lol
Comment Share
Share via: 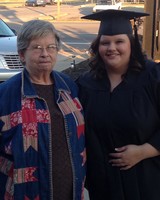