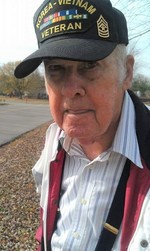 Sergeant Major (SGM) Retired Hubert Sumner Thomas, 91, passed away at 3:00am on May 9, 2020, at Tennova Clarksville Hospital from complications due to Parkinson’s disease (a result of exposure to Agent Orange from his time in Vietnam). He served his country for 43 years, 30 of which were active duty and several more as hip pocket orders. He then served as The Retirement Services Officer at Ft. Campbell, KY for 13 years.
A Celebration of Life with Military Honors will be held Thursday, May 14, 2020 at 12 p.m. at Little West Fork Baptist Church. Burial will follow at Kentucky Veterans Cemetery West.
The family will receive friends Wednesday from 4 to 7 p.m., May 13, 2020 and again on Thursday from 11 a.m. until the hour of service at the church. Due to recent health concerns, the family does request that social distancing takes place.
Hubert was born in the early morning on April 10, 1929, in Prichard, AL, (a suburb of Mobile), to Robert Otis Thomas and Charlotte Mae Hammond Thomas. Both parents preceded him in death. He often (humorously) retold the story of this birth with his mother and doctor in attendance, knowing it was early morning because of the smell of coffee and bacon.
SGM (Ret) Hubert Sumner Thomas is survived by his wife of 71 years, Mary Elizabeth Thomas. She remembers that the first time she saw him, he was walking into her church wearing a yellow shirt. He is also survived by his son and daughter, Hubert Sumner Thomas, Jr. (Chip) and Barbara Regina Medeiros (Gina); his son-in-law, Eddie Medeiros, Jr.; grandchildren, Amanda Gayle Thomas, Grant Thomas Medeiros, Lyndsey Kaye Thomas, and Courtney Elizabeth Thomas; nieces, nephews, and great-grandchildren.
Hubert is preceded in death by six brothers and three sisters. He has two surviving brothers, John Alexander Thomas of Warsaw, VA and William Thomas of Atlanta, GA.
He was a godly man, known for his quick wit, jokes, kind and compassionate spirit, and hugs. Hubert knew how to make you laugh and smile. He loved Alabama football and never missed a football game at Ft. Campbell High School. He loved his wife, God, and his Country.
SGM Thomas was known for willingly assisting people, no matter the need. He was Deacon Emeritus of Little West Fork Baptist Church in Clarksville, TN. His deep humility would never allow us to name the long list of hearts and lives he touched throughout his journey in this world.
His military awards include the following: Bronze Star Medal, Meritorious Service Medal, Joint Service Commendation Medal, Army Commendation Medal, National Defense Service Medal 1st OLC, Good Conduct Medal 10th Award, Vietnam Service Medal with 2 Campaign Stars, Republic of Vietnam, Campaign Medal with 60 Device, four Oversea Service Bars, United Nation Service Medal, Korean Service Medal with 3 Campaign Stars, and Meritorious Service Medal 1st OLC.

He continued with great strength and perseverance until the very last moment he took the Master's Hand. Even in the hospital, he sang hymns of praise and thanksgiving to God. SGM Thomas will be greatly missed by those who love him.
Memorial donations may be made to Little West Fork Baptist Church for a new sound system.
Condolences may be made online at www.NaveFuneralHomes.com