To share your memory on the wall of James Holleman, sign in using one of the following options:

A patriarch of his family and his community, he was a gentleman and the gentlest of men. The strength of his character shone through his love of the Lord, his beloved wife, family, friends and associates. With great joy, he and Christa Nussbaumer Holleman shared a lifetime of giving to all who were blessed by their love and leadership.

Following his graduation from Vanderbilt University, Mr. Holleman became owner and President of James G. Holleman Real Estate and Insurance Company in 1953, which had been owned by his father and originally established by his grandfather. The company is now known as Coldwell Banker Conroy, Marable and Holleman. He also served as Chairman of the board of CMH Commercial Properties. Until his passing, he was among the oldest realtors licensed in the state of Tennessee and remained active throughout his career in development and commercial real estate ventures. He served as past-president of the Clarksville Board of Realtors and former president of the Insurers Board of Clarksville.

He was a founding director and Chairman of the Board of Heritage Bank and Heritage Financial Services, Inc., as well as a founding director of Guaranty Federal Savings Bank. Mr. Holleman was a former two-term councilman for the City of Clarksville and was one of the organizers and developers of Queen City Communications, Clarksville’s first cable TV system, now Charter Communications. He served as a trustee of the Board of Trustees of Baptist Hospital (Nashville, TN); a trustee of Baptist Health Care Systems, Inc. (Nashville); Board Chairman of Baptist Three Rivers Hospital (Waverly, TN) and a former member of the Committee on Foreign Relations (Nashville).

An ever faithful and humble servant, he was actively involved in church, educational and civic endeavors. Mr. Holleman was a lifelong member, deacon, past Chairmen of Deacons, and Sunday school teacher at First Baptist Church Clarksville. An advocate for education, he served as a trustee of the Board of Trustees of Belmont University (Nashville) and endowed scholarships at Belmont University and Austin Peay State University. Serving continuously since its establishment in the 1980’s, he was a founding director and president and chairman of the Austin Peay State University Foundation. He was a former trustee and Chairman of the Board of Clarksville Academy and was a scoutmaster. Throughout his lifetime, he remained passionate about mentoring youth and championing their success.

Mr. Holleman served as president and director of the Clarksville Area Chamber of Commerce; was an organizer, past vice-president and former board member of Leadership Clarksville; and was a member of the Development Council of Aspire 2000. A devoted Rotarian, he served as President of Rotary of Clarksville, was instrumental in developing Rotary Park and was recently recognized as Rotarian of the Century. He was a past United Way Campaign Chairman, former board member of the Montgomery County Heart Association and served in numerous other community and philanthropic organizations.

The family wishes to express their gratitude to Right At Home and AseraCare Hospice for their loving and compassionate care. In lieu of flowers, the family requests memorial donations to the First Baptist Church Endowment Fund, 435 Madison Street, Clarksville, TN 37040.

To send flowers to the family or plant a tree in memory of James Granville Holleman Jr., please visit our Heartfelt Sympathies Store.

Your family at Aladdin Travel sent flowers to the family of James Granville Holleman Jr..
Show you care by sending flowers

Posted Mar 04, 2020 at 12:36pm
Our prayers and sympathy go to the friends and family of Jim Holleman. Our Senior Center was blessed by his acts of kindness and generosity. May God bless each of you.
Comment Share
Share via:
DM

Posted Mar 03, 2020 at 10:07am
Carol and I have known Jim Holleman for many years; professionally and as a great friend and fellow Christian. We loved him and greatly admired him. I remember him as a Sunday School teacher, as a Scout leader, as a Rotarian. I remember him as a wonderful Christian leader at First Baptist Church. Mr. Holleman loved his family, he loved his Hometown and the citizens of Clarksville. His absence will be felt by many. And, Jim's memory will be cherished for years and years.
Comment Share
Share via:
YT

Your family at Aladdin Travel

Posted Mar 02, 2020 at 10:13am
Elizabeth, sending you our love, support and prayers to you and your family. Cherish your memories!

Your family at Aladdin Travel purchased the Large Basket Garden for the family of James Holleman. Send Flowers

Flowers were purchased for the family of James Holleman. Send Flowers

Posted Mar 01, 2020 at 04:43pm
Deepest condolences from all members of Clarksville High School In Memory Group-Facebook. God bless you, and comfort you all, during your time of sorrow.
Comment Share
Share via: 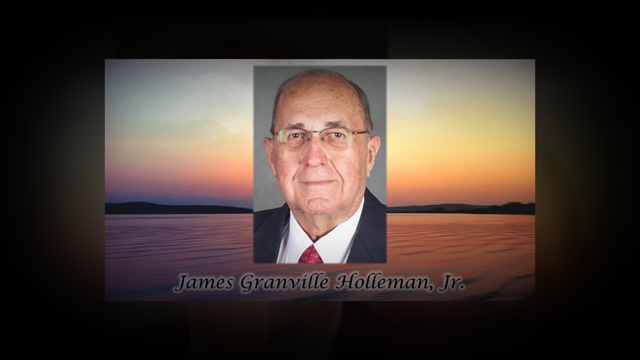