To share your memory on the wall of James Alsobrooks, sign in using one of the following options:

Provide comfort for the family of James Alsobrooks with a meaningful gesture of sympathy.

James was born February 19, 1922 in Erin, Tennessee to Roy Lee and Lela Edna Averitt Alsobrooks in a log cabin with no running water or electricity. In those days, James walked 100 miles per month to Pollard School and Cedar Hill. He graduated from Yellow Creek High School May of 1939, and then worked for the soil conservation department and engaged in farm production with his dad, Roy.

In 1943, James volunteered for Armed Services, US Army, and was in the 11th Armored Infantry. The doctor told James, “You’re JUST what we’ve been looking for!” James was committed to combat in 1944 and assisted in liberating the 101st Airborne Division at Bastogne, Belgium. Sergeant Alsobrooks was issued the following awards and decorations during his service in WWII: Purple Heart (with 1 Oak Leaf Cluster), European African Middle Eastern Theater Ribbon (with 3 Bronze Battle Stars), Good Conduct Medal, Combat Infantryman Badge.
James left the Army in 1945 and started working at Ft. Campbell, KY, making only 77 cents an hour in the transportation department. After 20 years of dedicated service, he transferred to the cold storage department of the commissary until 1968. In 1968, he returned to the transportation department as the supervisor of the transportation inspection department which included 60 counties in Middle Tennessee and Western Kentucky and over 150 commercial moving facilities. He retired from civil service in 1978 with over 30 years of devoted service to our nation.

James loved the outdoors. He was an avid fisherman, hunter, and loved to garden! Gardening was his passion. He grew lots of vegetables over his years of living. If you were ever the recipient of his silver queen corn, you had a tasty treat of some of the best corn grown in Montgomery County!

McReynolds-Nave & Larson Funeral Home is in charge of James’ service. The details of the exact date are pending and will be shared later when circumstances permit.

To send flowers to the family or plant a tree in memory of James Alsobrooks, please visit our Heartfelt Sympathies Store.

Receive notifications about information and event scheduling for James

Posted Apr 07, 2020 at 02:48pm
We are so sorry to hear of Mr. Alsobrooks's passing. I've been thinking of how much he enjoyed going to the dining room and the current crisis not allowing it. He was always friendly to all of us. As were his family members we met. His obituary is beautiful--he was a fine person.
Our love and prayers for you all
The Devers Family
Comment Share
Share via:
ES

Posted Apr 06, 2020 at 11:43am
I have enjoyed having you as a Grandfather in Law for the last 18 plus years. You are a good man and will be missed.
Jonathan Smith
Comment Share
Share via:
ES

Posted Apr 06, 2020 at 08:53am
I am saddened by James Alsobrooks’ passing but am fortunate to have known him. He was a good neighbor and a quiet, decent and honorable man. He will be missed.
Comment Share
Share via: 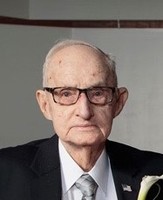