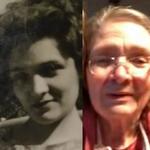 Elisabeth Gunda Smith, age 80, of Adams passed away on Monday, May 27, 2019 at Tennova Healthcare.
She was born on October 1, 1938 in Rosenthal Germany to the late Helmut Johannes Cuprych and Antonie Seidenstucker. She enjoyed watching Jeopardy, travelling, flowers, and time with her family. She was equally beautiful on both the inside and out, and was known as a great mother.
In addition to her parents, she was preceded in death by her husband, Gilbert Lee Smith, Sr.
Survivors include her children Gilbert Lee Smith, Jr.; daughters, Peggy Ann Monhollen, and Mikki Lawrence; grandsons, Randy Lee Lawrence, Christopher Allan Monhollen, and James Edward Lawrence, and great-granddaughter, Harper Elisabeth-Ann Monhollen.
No services are planned at this time.
Condolences may be made online at www.NaveFuneralHomes.com