To share your memory on the wall of Debbie Smith, sign in using one of the following options:

A Celebration will be held 1 p.m. Tuesday, February 11, 2020 at McReynolds-Nave and Larson Funeral Home with Rev. Garrett Miliken officiating. Burial will follow at Resthaven Memorial Gardens. Visitation will be from 11 a.m. until the hour of the service at the Funeral Home.

Debbie was born on March 15, 1956 in Kansas City, MO., daughter of the late Peter Broadbent and Loretta Broadbent Stacey. She was a loving mother, grandmother, and sister to her family. Debbie will greatly be missed.
In addition to her parents, she was preceded in death by her husbands, Eugene Sueiro Sr. and Terry Smith and son Eugene Allen Sueiro II; and step father, Roy Stacey.

Condolences can be made online at Navefuneralhomes.com
Read Less

To send flowers to the family or plant a tree in memory of Debbie Smith, please visit our Heartfelt Sympathies Store.

We encourage you to share your most beloved memories of Debbie here, so that the family and other loved ones can always see it. You can upload cherished photographs, or share your favorite stories, and can even comment on those shared by others.

Marta, Roy & Tia Elena, Linda Harb Patrick and Family, and others have sent flowers to the family of Debbie Smith.
Show you care by sending flowers

Guaranteed hand delivery by a local florist
ME

Posted Feb 10, 2020 at 05:31pm
We are so deeply sorry - remembering your mom and sending prayers for peace and comfort.

Posted Feb 10, 2020 at 01:03pm
Such a very sad day to hear this news. Hold on to your memories and let them guide you during this time of sadness. Prayers going up. up, up and may you Debbie Rest in Peace. Love you friend, you will be missed, Debra and Billy Smith
Comment Share
Share via:
LF

Linda Harb Patrick and Family purchased the Sentiments of Serenity Spray and planted a memorial tree for the family of Debbie Smith. Send Flowers

Posted Feb 09, 2020 at 06:00pm
May Gods presence cover you during this time of tragic sorrow. Our deepest condolences to you. We love you and are praying for you.

Flowers were purchased for the family of Debbie Smith. Send Flowers 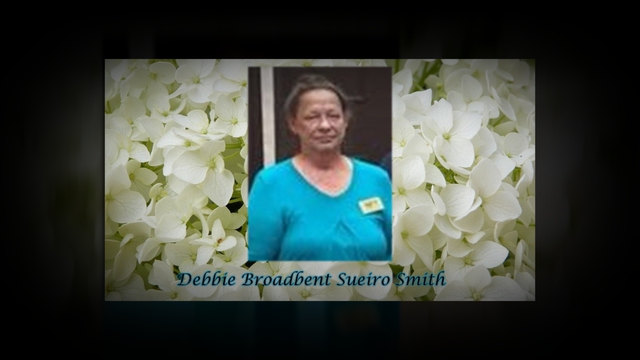