To share your memory on the wall of Colonel James Hallums (Ret), sign in using one of the following options:

Provide comfort for the family of Colonel James Hallums (Ret) with a meaningful gesture of sympathy. 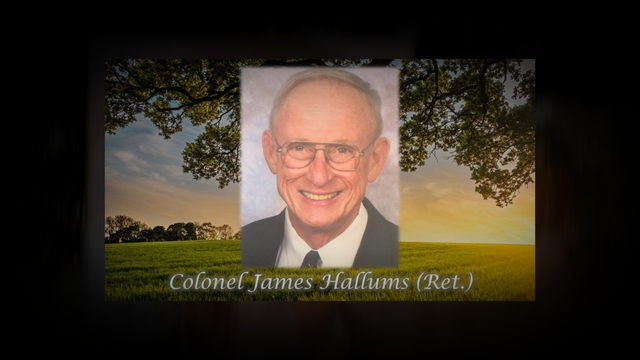 We encourage you to share any memorable photos or stories about Colonel James. All tributes placed on and purchased through this memorial website will remain on in perpetuity for generations.

Love Val and Lesley, Love Roy & Kimberly Matthews, and others have sent flowers to the family of Colonel James Hallums (Ret).
Show you care by sending flowers
Hand delivered by a local florist

Love Val and Lesley, Love Roy & Kimberly Matthews, and others have sent flowers to the family of Colonel James Hallums (Ret).
Show you care by sending flowers
Hand delivered by a local florist
JH

COL Hallums was a great man and true Warrior. Prayers that the Peace of Christ will comfort his many loved ones. Warmest regards, Jim H.
Comment | Share Posted Jan 28, 2020 at 09:33am via Condolence

Sad day as I learned of Jim’s passing. My condolences to you and your family Robin. I was a company commander serving with Jim when he commanded the 3-187 Rakkasans. Learned much from him and truly enjoyed my time in the battalion. I loved his drive and enthusiasm - never a dull moment be it in garrison, the field, or on deployment. He will be missed. Paul Martin
Comment | Share Posted Jan 02, 2020 at 11:09am via Condolence
HS

With deepest respect. Our thoughts and prayers are with the family.

May his memory be a blessing! Sending love to the Hallums Family!

Sincere condolences to the Hallums family for your loss. I was a PFC with Col Hallums w the Rakkasans. Col Hallums would set a soldier up for success by demonstrating what it means to be a leader, clearly articulating the standard you should hold yourself to, and pushing you to know that you were capable of so much more than you thought you were.

I have a keepsake from my days in the 187th I've carried for more than 30 years: as a PFC on CQ one night, I dropped off some suggestions in the Suggestions box, and Col Hallums - who was responsible for the lives of hundreds of men in his RDF unit, took the time to hand-write a detailed response speaking to my points. He left a lasting impression - sorry to see his passing. He is one of the leaders I measure everyone else by as I move through my career.