To share your memory on the wall of Col. (Ret.) Ronald Perry, sign in using one of the following options:

Provide comfort for the family by sending flowers or planting a tree in memory of Col. (Ret.) Ronald Perry.

Provide comfort for the family of Col. (Ret.) Ronald Perry with a meaningful gesture of sympathy.

Col. (Ret) Ronald Clair Perry, age 87 of Clarksville, passed away from a stroke on Thursday, July 30, 2020, at Novant Health in Thomasville, NC.

A family graveside service with Military Honors will be held at 10 a.m. Friday, August 7, 20... Read More
Col. (Ret) Ronald Clair Perry, age 87 of Clarksville, passed away from a stroke on Thursday, July 30, 2020, at Novant Health in Thomasville, NC.

A family graveside service with Military Honors will be held at 10 a.m. Friday, August 7, 2020, at Greenwood Cemetery.

Ron was born September 26, 1932, in Portland, ME to the late Harold and Elizabeth Perry. Ron retired as Colonel after 23 faithful years of service in the U.S. Army.

Col. Perry served as Commander of the 4/77th Aerial Field Artillery, 101st Airborne Division
He additionally served as Commander (Director) of the Attack Helicopter Training Division (Cobra Hall), HAAF, Savannah, GA. He was a Green Beret and served in the 1st Cavalry in Vietnam on his first of 2 tours.
His decorations include Silver Star (A Shau Valley), Distinguished Flying Cross (2), Bronze Star (3), Purple Heart (multiple), and several others.

Following U. S. Military retirement, Ron served 20+ years at Sikorsky Aircraft, United Technologies Corporation, and was instrumental in the development of the Black Hawk aircraft.

He was preceded in death by his first wife, Laura Diane Perry; his son Cedric Perry; and his son by marriage Staff. Sgt. Thomas E. Vitagliano.

To send flowers to the family or plant a tree in memory of Col. (Ret.) Ronald Clair Perry, please visit our Heartfelt Sympathies Store.
Read Less 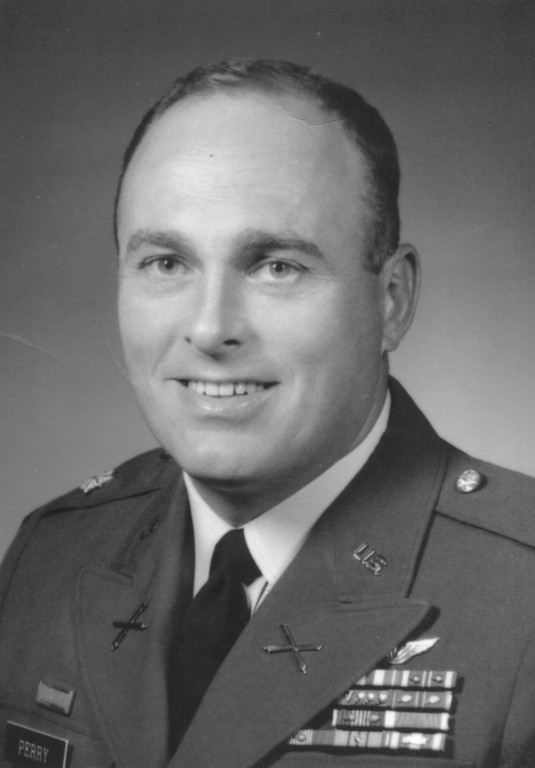 We encourage you to share any memorable photos or stories about Col. (Ret.) Ronald. All tributes placed on and purchased through this memorial website will remain on in perpetuity for generations.

I first met Ron at Fort Campbell Kentucky during the competitive testing of the aircraft that became the Blackhawk. Ron was the colonel who ran the aviation operations for the testing, and I was impressed with his leadership, his clarity, his conviction and above all his sense of integrity. Later Ron came to work with us at Sikorsky and I got to admire him even more and earn his friendship. I trusted Ron so much I bought a used car from him! It’s sad to hear of Rohn‘s passing but I know he affected everyone the way affected me. Someday they will tell you about his escaping and evading in Vietnam and how he was rescued. Rest in peace Ron, we’ll see you at Fiddler’s Green.
Comment | Share Posted Aug 07, 2020 at 08:09pm via Condolence
RM

I was another compatriot of Ron’s on the Blackhawk program and appreciate being able to serve with him. He was a dedicated hard working team member.
Comment | Share Posted Aug 06, 2020 at 10:42am via Condolence
KH

We are so sorry for your loss! We are thinking and praying for you all! Love, The Heath family

Ron was my best friend. We shared many common experiences, from our service in combat, flying Cobra gunships, loosing aircraft to enemy action and even getting nicked ourselves a few times. Despite our shared military adventures I did not meet ROn until our civilian careers at Sikorsky Aircraft. ROn was the go-to-guy on the Army Black Hawk program. His trusted word to many suppliers kept the production line moving until paperwork and payments caught up. We traveled together often during our 20+ years at Sikorsky promoting the attributes of the Beach Hawk helicopter and justifying sustained procurement. Occasionally we found time for relaxation ... trips to Myrtle Beach, AAAA Conventions or back to the farm in Clarksville. I recall Ron’s advice on my first trip to the farm “Don’t worry about the Bulls ... just don’t get between a cow and her calf”. Easy for him to say when a Bull is looking me in the eye while I’m standing in the middle of a field and he’s sitting in a John Deer Gator. We did other cool stuff together: built a deck, laid new flooring, installed a basement bath (he stuck to the plumbing ... left the electrical to me). Electrical work made him nervous. We played golf often, enjoyed musical entertainment and drank beer together. I will miss my best buddy!
Lieutenant Colonel Ron Dobson United States Army Reserve Retired
Comment | Share Posted Aug 04, 2020 at 01:11pm via Condolence
HS

You are in my thoughts.

Flowers were purchased and a memorial tree planted for the family of Col. (Ret.) Ronald Perry.
Order Now | Show All
Comment | Share Posted Aug 04, 2020 at 12:17pm via Floral Arrangements