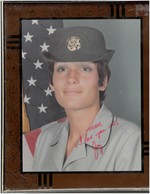 Carla entered into this life on January 19, 1953, in Columbus, OH to Carl Elwood Bell and Joyce Lee Griffin Bell Coughlin. She served in the U.S. Army (WAC) and participated in Operation 101 in Germany during the Cold War. Following her military service Carla went on to receive a master’s degree in social work and became Clarksville’s second licensed clinical social worker. She worked as a supervisor at Ft. Campbell for the Wounded Warrior Battalion. She also worked as an adjunct professor in APSU’s department of Social Work. Carla dedicated her life as an advocate for animals, women, and children in need. She was a founding member of the Unitarian Universalist Fellowship and belonged to Bobbin Lace Guild.

Flowers may be sent to the funeral home or memorials may be made to the Wounded Warrior Project.

Condolences may be made at www.NaveFuneralHomes.com